Now that we’ve explored the use of inputs from sensors with Arduino, we can start to play with outputs as well. The first output we’ll explore is the Servo motor. Reminder that you should do all of these exercises using your physical kit (not TinkerCad).

A servo motor takes only one digital input as well as power and ground. Usually the power cable is red, the input cable is orange, and the ground cable is brown or black. The servo motor uses pulse width modulation (PWM) to take angles as inputs and move the servo to that position. Recall that only some pins on the Arduino are PWM compatible, which is indicated by the ~. The actual control of the width of these pulses (which the servo motor can then interpret into angles) is fairly complex. Effectively, for every angle there is a corresponding “blip” duration. Pulses of 1ms or less correspond to the zero position, and pulses of 2ms will send the servo to 180 degrees. If, for example, we wanted to send the servo to 135 degrees, we would utilize a pulse of 1*(135)/180 +1= 1.75 ms. 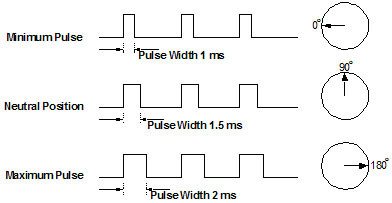 To program this using only analog outputs, while possible, is excessively tedious. Instead we utilize the built-in Servo library. Refer to sketch>include library> Servo to include the library to your program. The library allows you to create an object Servo in your code. In order to create such an object, we utilize the syntax below:

This tells my code to create an object of type Servo (make sure the S is capitalized, the word should turn orange) named whatever I would like to name it- in this case I name it timothy. This is exactly the same as when you declare an int or bool, but in this case I am creating a Servo instead of an integer. Now that I’ve created my object “timothy” I can run functions on it. The first thing I want to do when I create a Servo is define which pin it is attached to. I do this with the .attach() function:

This indicates to my code that my servo, which I have named timothy but you can name whatever you’d like, is attached to my Arduino at pin 9. Finally, I can tell the servo what angle to go to. I do this using the .write() function:

In this case, I decided to tell it to go to the angle 135. By default, write takes the angle argument (an argument is the text that goes in the parentheses of a function) in degrees. Note that the Servos we use in this class have a limited range of motion from 0 to 180 degrees.

Be sure to wire up the Servo as shown before getting started (use your physical kit for this, not TinkerCAD). Hint: Remember that an object is global as long as it is placed before the setup.

When you compile your code, you should see your servo (with the horn - the white plastic part- attached) go to the zero position. If you try to push it (gently - you don’t want to strip the gears) it should provide resistance. ​​

You should see that the servo does sweep back and forth, but not the full 180 degrees we expect.

Short answer: Explain the difference in output between exercises two and three. What is the importance of a delay in this code?

With the added delay, we can now see that there is a full 180 degree range of motion. If you’re not seeing this result, try increasing your delay.

For each of your codes, take screenshots of the IDE, a video of the servo movement. Compile these into a Word document using the template we provide, and submit as a PDF.